Rock trio DMA’s have garnered considerable attention over the past year, both in their native Australia and, increasingly, abroad. Signed by Aussie label I OH YOU before they’d played a single gig, they’ve gone on to tour the US and UK, impressing audiences and attracting endless ‘who do they sound like?’ comparisons.

DMA’s Johnny Took recently took time out to talk with GasCan’s Evan Kanarakis about the band’s origins, their music and where the road ahead may lead…

GASCAN: For the uninitiated, tell us a little about the DMA’s and how the band came to be…

JOHNNY: DMA’S is a song writing collective consisting of Tommy O’Dell, Matt Mason and myself. We met through playing in multiple bands in the same area of Sydney.

GASCAN: Your first few demos were famously finished off in your bedroom and debut single ‘Delete’ got the ball rolling in a big way last year. Did label attention come quite swiftly?

JOHNNY: Yes. I think because we took our time to write before jumping into the industry. Everything has been moving pretty swiftly since… we were just ready for it.

GASCAN: Some musicians talk about wanting to perform their first hundred gigs in the practice room and then heading out live, but you guys have very much been thrown into the thick of things with a heavy tour schedule in a fairly short period of time. Has there been a steep learning curve for the band in this sense? Does the band ever need to venture back into the practice room to iron things out?

JOHNNY: I believe you can only rehearse so much before your show reaches a ceiling it can’t shake. You learn the most about your performance when you start to venture out to different venues and audiences. Through touring, the show becomes second nature and you just enjoy yourself on stage instead of consciously performing. In saying that, when bringing new tunes to the table it’s always good to get into a rehearsal room and get them into a ball park before playing live.

GASCAN: How do you share song writing duties? In getting everything written and ready for your forthcoming album do you find the three of you wrestle with wanting to over-tinker on the finished product, or is recording a much quicker process for the band?

JOHNNY: It’s different for every tune, which is a good thing! I think this stops us from having songs that all sound the same. The majority of the album was written a while ago. I think the tunes may even be there for the second though, though who knows what we will write before it’s time to pick. Reaching a final product has never been a quick process and I’ve never been one hundred percent happy with any tune we’ve released, but sometimes you just gotta’ let go and move forward. If not, I’d probably still be working in a bottle shop or doing odd jobs around Sydney… 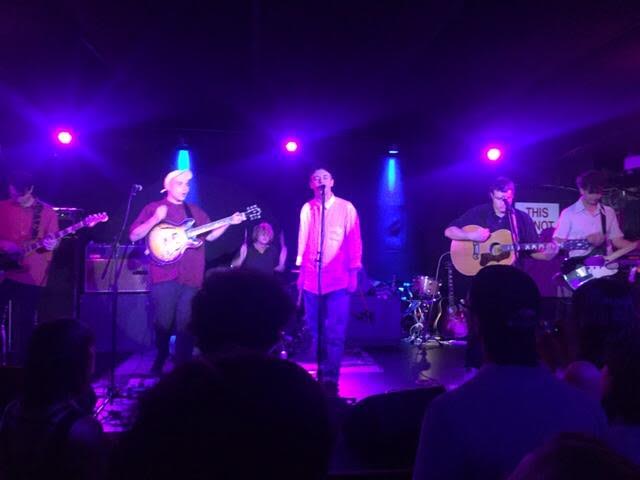 GASCAN: Any personal favourites from the forthcoming album?

JOHNNY: Melbourne, Step Up The Morphine, Blown Away.

GASCAN: What bands and musicians do you feel have influenced and informed your music the most? Are the Oasis comparisons wearing you a bit thin now, or is it something you’ll happily take on?

JOHNNY: I get the Oasis comparisons, mainly because of the tone of Tommy’s voice. It doesn’t bother me because they were a great band. However I think if you know your music you can find some deeper influences in there. Personally my influences come a little bit from everywhere: Springsteen, Dylan, Wilco, The Jesus and Mary Chain, The Verve and The Good, The Bad and The Queen, to name but a few…

GASCAN: How do you feel you fit into the Aussie music scene as it currently stands, and what are some favourite fellow musicians back in Oz? If we lean on the Oasis comparison again –at least for a moment- so much of what they produced during that period from ’94-97 was born from the inherent competition within the Britpop scene that inspired acts to strive harder, create more and stand out from the pack. Are there other bands or musicians that you feel are pushing and driving you forward in the same way?

JOHNNY: I think when we first released ‘Delete’ there wasn’t really anyone doing that sound here [in Australia]. Consequently we had a lot of people love it and hate it. However in the past six months some of my favourite Sydney bands have started gigging and releasing tunes which are closer to our vibe… names like Green Buzzard, PLANET, Chief Havoc, Au.Ra and Popstrangers. Check them out!!

GASCAN: What’s your take on the current state of live music in a city like Sydney? A few notable venues have been closing up shop in recent years…

JOHNNY: There are good bands doing cool shit but not enough great venues. People like Matt and Dan Rule [formerly owners of Sydney’s Annandale Hotel] are doing great things like the ‘King Street Crawl’ and bringing live music back in a big way. There were some big changes in the Australian government recently, so hopefully some more changes are coming up in the future.

GASCAN: What are some of the most significant differences you’re seeing in the international music scene (for better or for worse) when compared to home?

JOHNNY: There are just not enough gigs to play here in Australia. Unless you want to do the rural run -which can be pretty disheartening. Being in the northern hemisphere allows a band to tour extensively, and by the time you’re done, it has been long enough to go back to your first destination. The festivals are also able to get better line-ups because they don’t have to fly bands halfway around the world to get here. That trip is taxing in more ways than one.

GASCAN: With such a hectic touring schedule, how has the band taken to life on the road? Is road weariness setting into your live performances (and your livers)?

JOHNNY: I think we all learnt a lot from this first world tour. I’ll definitely be more prepared for the next one and picking my battles carefully.

JOHNNY: There were a couple of nights in Europe where people arrived back at the hotel with no pants and at least one shoe missing (I don’t even know what happened there)… the rest probably wouldn’t be that cool to say in an interview.

GASCAN: Looking ahead, where do you want to see the band in three or five years? Or do you even think that far ahead?

JOHNNY: I just want to keep my song writing up to the standard it needs to be. If that happens, I think the rest will come. I also want to keep furthering the live show from the purely guitar driven outfit it is now to something bigger.

GASCAN: What’s next for the band?