Since 2009 and with a sound that spans influences as diverse as country, rock and Americana, The Mallett Brothers Band have cemented a reputation both within their native Maine and across the United States as a critically acclaimed band with a reputation for great live shows. Consisting of brothers Luke and Will Mallett (vocals and guitar), Wallly Wenzel (vocals, guitar and dobro), Nick Leen (bass), Andrew Martelle (fiddle and mandolin) and Adam Cogswell (drums), the band can claim four albums under their belt, and boast a busy touring schedule that will see them performing from Maine to Tennessee and back again in just the few short months ahead.

Recently GasCan’s Evan Kanarakis had a chance to sit down with Luke Mallett to talk about the band, including their formation and influences, touring life, and the evolution of their recording process. 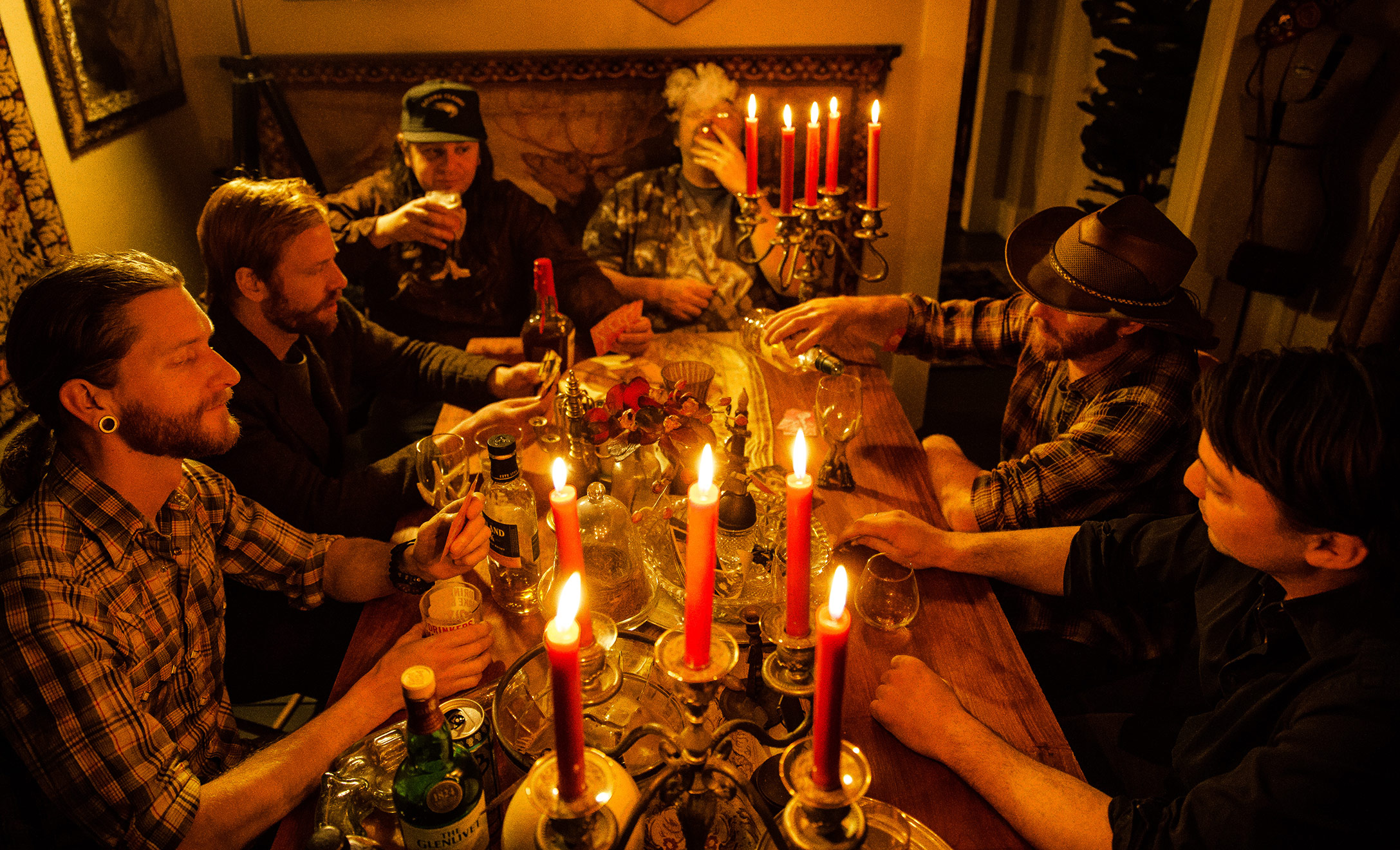 GasCan Magazine: For the uninitiated, tell us a little about how the band began? Along with brother Will, I assume your musical tutelage started at a young age given your father is [noted folk singer-songwriter] David Mallett?

Luke Mallett: Back in 2009 my brother came to Portland. He was crashing with me and Nick, whose other musical projects were winding down at the time. We had a few songs, and an idea. Nick played a large part in putting together the rest of the original lineup, and we hit the ground running with a self-titled first album. Although Will and I grew up visiting the studios, seeing our Dad on stage, or watching him write at home, we didn’t actually play a lot of music together until this band started. The timing was perfect.

GCM: The band itself sweeps through a great many genres, from country to rock and roll to blues, Americana and back again. Is this simply a reflection of the band’s diverse interests and influences or perhaps even a conscious decision to avoid being pigeon-holed? I imagine it limits your creative freedom once a particular label ‘sticks, no?

LM: I think it’s always been an evolution for us. Our first three releases document different stages of being a band. The self-titled 2010 album was an experiment, really. We were mostly new to each other and some of us new to the style. “Low Down” reflected the live feel that quickly developed once we started playing more and more shows, and “Land” was largely written out on the road in places we had never been. That’s when I feel like we hit our stride. “Lights Along The River” was a continuation of all of those things. Several tours, big shows and tiny shows, more studio experience, and more experience with everybody’s individual backgrounds and sounds. We play what we love, try to keep it interesting, and try not to worry about doing any one thing. Music is big.

Can’t spill too many beans, but we have begun working on a new record and hope to have it out before 2016 is over.

GCM: How does the fact the band originates from Maine inform your music? Is there a definable ‘Maine’ sound?

LM: Maine has a huge effect on the people who grow up here, even long after some of them leave. I don’t think there is a definable Maine sound, but there are Maine people who are all making incredible art. From hip hop to singer-songwriters to rock bands and funk bands, even big bands. We’re a special breed up here, highly adaptable and capable.

GCM: The live scene in a city like Portland, Maine has come a long way in recent years. Is there any sense of a larger movement or ‘scene’ emerging in which bands are quite collaborative or is it far more competitive than that?

LM: Portland’s music scene was always an open arms community. It’s a town where we nearly all know each other, have worked in one project or another together, share stages, etc… I’ve heard of really competitive scenes in other cities, but Portland is not one of those. It was an amazing place to get this band rolling.

GCM: In the past when I’ve chatted with bands from Maine many have referred to ‘The Boston Roadblock’, wherein success in Maine doesn’t necessarily translate to opportunities for shows at the next major stop in the road south – Boston – where often local bands (and local favoritism) can make securing a good night in a good venue a challenge. Did you ever encounter such issues earlier in your career?

LM: It’s really hard making the push to be a touring band, from anywhere. Any time you roll into a city or region for the first time, plan on playing a stage that’s too small, with a shoddy PA system, for little to no pay in front of few to no people. Make lots of friends… meet some local bands… put on a badass show anyway. Then come back and do it again. Eventually you move up -and if you don’t and the crowds never show, just try a different city or region. This is true from Maine to Texas and everywhere in between. There are different kinds of crowds everywhere.

We had to put a single mic-stand together with spare parts and tape, plug the mic in with three adapters, and squeeze onto a tiny corner stage.

GCM: These days you perform over 150 shows a year. Does the band ever find the need to venture back into the practice room to work out any kinks and sharpen up on new material, or is much of this ironed out in the live process?

LM: Rehearsal is vital. We try and jam two full days a week when we’re home from the road. Sometimes we’re working on new stuff; sometimes we’re completely rethinking old stuff. Sometimes we jam in A for an hour and a half.

GCM: Six band members make for six diverse personalities. How do you guys keep an even keel when you’re living in one another’s pockets on the road? Even for a bunch of musicians who likely dreamt of the chance to be in a band one day and touring extensively, road weariness is a real thing, right? 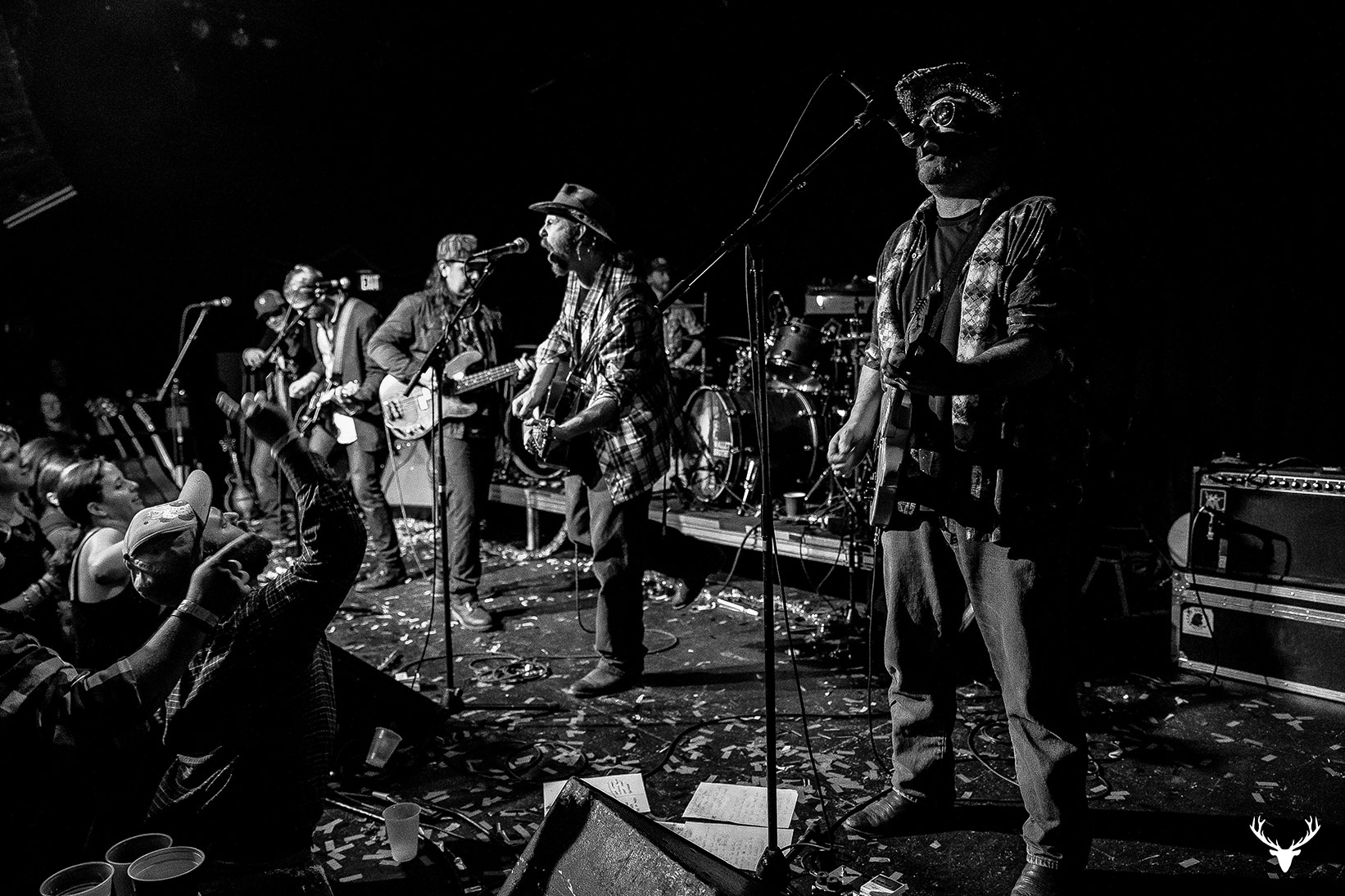 LM: It is a thing. I think we’re good at it, but it can burn bands out eventually. Everybody’s got their own rhythm and you have to work together. It takes a certain kind of person to really fall in love with the road. It’s the best and worst part all rolled into one.

LM: They can all turn into fun nights. There was one show in Memphis at a club we’d never been to, and we arrived to find less gear than we hoped. We had to put a single mic-stand together with spare parts and tape, plug the mic in with three adapters, and squeeze onto a tiny corner stage. We ended up having a great night, meeting a bunch of cool people and going back again later. We came prepared the next time, mic stands and all.

GCM: Your most recent release was the critically acclaimed ‘Lights Along The River’. What’s slated next for the band in terms of recording?

LM: Can’t spill too many beans, but we have begun working on a new record and hope to have it out before 2016 is over. It’s a concept we started fooling around with as far back as last winter, so we have a good jumpstart on the songs. Some have already even made it onto our live set lists.

GCM: Has the recording process evolved much over the life of the band in terms of how you approach songwriting and studio time?

LM: Every record has been different. The first two were engineered by our own Wally Wenzel, the third at Halo Studios with John Wyman, and “Lights Along The River” was done at a makeshift studio / cabin on Sebec Lake in northern Maine. We’ve always produced ourselves. The live show has had something to do with how we approach recording, which you can really hear on the latest album. Most of the tracking was done in a live room, with gear spread out everywhere. The feel of that kind of session is my favorite.

GCM: Last of all, what’s coming up on the road ahead for The Mallett Brothers Band? Where do you see things in one, three or even five years ahead?

LM: We plan on staying the course. We’ve managed to make this thing sustainable independently, at least mostly. We have a backlog of songs to dive into the studio with, we still enjoy the life and the road so we’ll keep touring, and hope that the organic growth we’ve seen in the last six years just continues. We hope to tour the west coast soon. Expand our reach. Maybe pay some bills. We’re hooked on it though, whatever it is.

All photos credited to MacGregor Photography.